After wasting a few hours playing with 2048, I realized that hey, I’m learning javascript, and 2048 is Javascript! I dove into the 2048 source code to see what I could find.

2048 is entirely client side, which means there is no server to manage. A high level view of the code is below:

Great! Let’s take a look. When the game is started, the GameManager constructor takes in the html_actuator, keyboard_input_manager and storage_manager objects as arguments. We do some basic initializing, and then this:

Up until then, I had only really dealt with pretty basic DOM events. Click, hover, submit, were dependable and familiar. Wtf is restart?

Some digging led me to reading about custom events in Javascript. Custom events are pretty much exactly like DOM events, but both the dispatches and the listeners are defined by you.

From the mozilla documentation:

You can also include data in the events you throw.

So where does that leave us? Let’s take another look at the 2048 code.

The “on” method lets us attach callbacks to custom events in the InputManager object. The emit function lets us throw custom events with directional data attached to them.

Let’s go over the steps in order

We are telling the callback that when it refers to “this”, it should refer to the GameManager, not the InputManager, even though it will be called from the InputManager.

In conclusion, reading through other people’s source code can be both educational and useful. Since I’ve started reading through it, not only have I become a better developer, but it makes playing 2048 itself a lot easier: 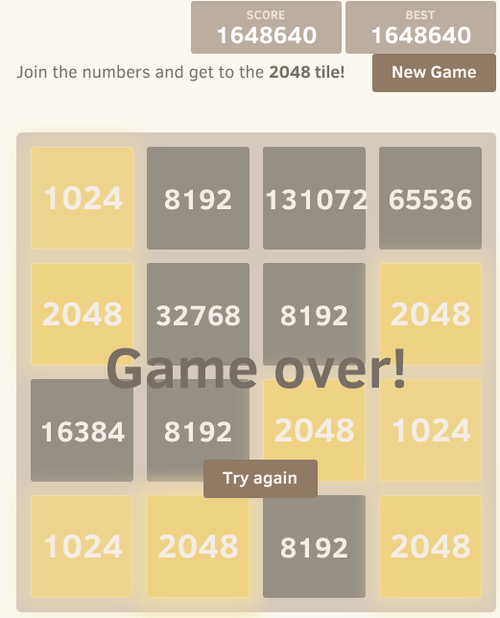